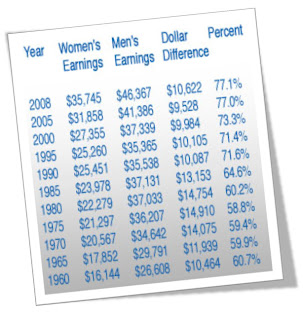 Today’s the day when women workers finally catch up with the pay men received last year—the day we mark as Equal Pay Day. Being three months and 20 days behind men’s wages means women who work full-time still are paid, on average, 78 cents for every dollar men are paid. According to the most recent data from the U.S. Bureau of Labor Statistics, the median wages of full-time, year-round workers in 2008 stood at $35,745 for women and $46,367 for men.

The chart here shows the molasses-like movement in closing the wage gap. One way to speed up the progress is to urge lawmakers to support the Paycheck Fairness Act, which was passed by the U.S. House in 2009. It updates the Equal Pay Act by giving employees the tools they need to close the wage gap and providing the government with enforcement power to correct pay inequities. Momsrising has an action here to urge your senator to close the wage gap and back the Paycheck Fairness Act.

The average woman loses $700,000 in pay due to gender discrimination in her lifetime.

Kudos to President Obama who has established the White House Council on Women and Girls. The high-level body, made up of Cabinet members and heads of sub-Cabinet agencies, is charged with advancing the rights and needs of women, including equal pay. Declaring today National Equal Pay Day, Obama notes that “government can only advance this issue so far.”

The collective action of businesses, community organizations, and individuals is necessary to ensure that every woman receives just treatment and compensation….I call upon American men and women, and all employers, to acknowledge the injustice of wage discrimination and to commit themselves to equal pay for equal work.

Sen. Tom Harkin, who has sponsored the Fair Pay Act, and Lily Ledbetter, whose landmark U.S. Supreme Court case re-ignited the issue of equal pay, put the issue of wage discrimination in the broader context:

[W]e must recognize that the problem of unequal pay goes beyond insidious discrimination. As a nation, we unjustly devalue jobs traditionally performed by women, even when they require comparable skills to jobs traditionally performed by men. Why is a housekeeper worth less than a janitor? Why is a parking meter reader worth less than an electrical meter reader?

The Fair Pay Act would ensure that employers provide equal pay for jobs that are equivalent in skill, effort, responsibility and working conditions.

Civil rights pioneer Dorothy Height, who died today, early on championed the notion that the rights of women are fundamentally connected to issues of fairness for all Americans. As the New York Times put it:

Ms. Height is widely credited as the first person in the modern civil rights era to treat the problems of equality for women and equality for African Americans as a seamless whole, merging concerns that had historically been largely separate.

Height “embodied struggle, strength, determination, love and elegance,” says AFL-CIO Vice President Arlene Holt Baker, and her passing today is a reminder of how an injustice to one is an injustice to all.