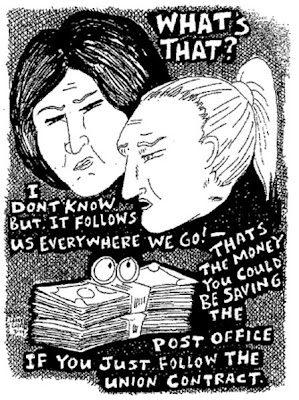 APWU Web News Article #135-09, Oct. 29, 2009
An analysis of the postal stations and branches being considered for closure shows that the USPS study process “discriminates against communities with high percentages of low-income, minority and transit-dependent residents,” according to recent testimony submitted to the Postal Regulatory Commission (PRC) by the APWU. In addition, the union asserts, the Postal Service uses incomplete data to support its conclusions.

In testimony submitted to the PRC on Oct. 21, economist Anita B. Morrison and APWU steward Michael T. Barrett enumerated significant deficiencies in the Postal Service’s methodology in selecting stations for closure. The national union has intervened in proceedings before the commission, which is preparing to issue “an advisory opinion” on the station-and-branch initiative.

Morrison’s testimony [PRC 10-21-09 Morrison - PDF] provided statistical evidence that the USPS plans would most severely impact communities where the postal services are needed the most — low-income neighborhoods where computer use is relatively low and where residents are especially dependent on public transportation.

More than three out of four stations — 287 of 371, or 78 percent — under consideration for closure have median household incomes below the national average, Morrison testified, and 41 percent have incomes below $20,000. These households are most likely to be affected by the inconvenience and cost of accessing more distant post offices, she said.

Pointing out that post offices in more well-to-do areas were less likely to be considered for closure, Morrison wrote: “This suggests that the process favors postal stations in more affluent neighborhoods.”

She also noted that “closure of a branch post office can have significant negative impacts on local business districts,” particularly in walkable neighborhoods that are critical to reducing America’s dependence on cars.

Morrison criticized the Postal Service’s procedures for gathering public input. “USPS currently gathers information from interested stakeholders without a specified forum for sharing initial feedback with the public,” she wrote. “In addition, the feedback represents a reactive rather than pro-active approach. Expanding the methods of soliciting feedback and adding other affordable feedback options could greatly improve this process.”
Incomplete Data
Testimony by Michael Barrett, of the Buffalo (NY) Local, [PRC 10-21-09 Barrett - PDF] asserts that the USPS uses incomplete data to support its conclusions, and overlooks information that would offer a more accurate indication of cost savings and the impact of closures on nearby stations and branches.

“The current analysis of cost savings performed by the Postal Service is cursory at best,” Barrett said. Many transactions currently performed at stations slated for closure will migrate to other postal facilities, he said, and so will the costs associated with them.

In addition, he noted, “The Postal Service calculates the total salary and fringe benefits costs associated with employees of stations or branches under study and considers this entire total to be savings to the Postal Service.” These costs will continue at other facilities, he said, and must be considered in USPS evaluations.

The data necessary to more accurately measure these costs is readily available to the USPS using current resources, Barrett testified.

USPS studies fail to accurately analyze the ability of nearby facilities to accommodate the migrating business, he said. “Where a neighboring station or branch does not have sufficient space for a separate box section dedicated to the closed station or branch,” Barrett’s testimony noted, “the closing will initially turn the entire volume of arriving box mail into Undeliverable As Addressed (UAA) mail. ... It is obvious from the UAA costs reported [by the USPS] that these additional processing costs are not insignificant.”

This should be accounted for in each USPS discontinuance study,” the APWU steward testified. “Yet despite the ready availability of the information needed to determine the additional processing costs,” the Postal Service does not appear to consider them at all.

Commenting on the testimony, Assistant Clerk Craft Director Mike Morris said, “Barrett and Morrison made important points about the consequences of USPS plans to close hundreds of stations and branches. We should share these conclusions with elected officials and other community leaders.”

Morris and APWU Vice President Cliff Guffey are coordinating the APWU’s response to the Postal Service’s Stations and Branches Initiative. A “tool kit” [PDF] to assist locals fighting the closure of stations and branches is available in the “Members Only” pages at www.apwu.org.
No comments:

“Enactment of this legislation to eliminate inequities, increase productivity and address the skills shortage in the civil service is a great victory for active and retired federal employees — and something that NARFE has worked for behind the scenes for a long time,” said NARFE President Baptiste. “We are happy the president has signed this important bill into law, and we are grateful to our friends in Congress who moved heaven and earth to include the civil service improvements in the final legislation.”

The new law allows federal agencies to re-employ federal retirees on a limited, part-time basis without offset of annuity; permits Federal Employees Retirement System (FERS) workers to initially credit half, and in 2014 all, of their unused sick leave toward retirement; provides for retirement equity for federal employees in Hawaii, Alaska and the U.S. Territories; ends the Department of Defense’s pay-for-performance personnel system, the National Security Personnel System or NSPS, restoring employees to the federal General Schedule pay system; and includes other civil service provisions.

“During the past several years, NARFE has played a leading role, along with other federal and postal employee organizations, in overcoming many obstacles to achieve passage of these needed civil service improvements,” Baptiste said. “For example, absent NARFE’s persistence, legislation sponsored by Collins; Sen. Herb Kohl, D-WI; and Sen. George V. Voinovich, R-OH, (S. 629) to allow federal retirees to be re-employed by the government would not have been included in the final Defense bill. Many federal retirees continue to make critical contributions to our safety and well-being during this time of national need, when work force shortages have deprived some agencies of employees with critical and specialized skills,” Baptiste said.

Baptiste was particularly pleased that a compromise was reached on the FERS sick leave legislation by phasing in the allowance. “We recognize that the inequity in the treatment of accrued sick leave between FERS and CSRS has hurt productivity and increased agency costs,” Baptiste said. “For that reason, we have strongly supported the concept that all federal civilian retirement programs credit unused sick leave toward retirement.” The NARFE president specifically lauded Moran for being a long-time champion of this issue.

NARFE, one of America’s oldest and largest associations, was founded in 1921 with the mission of protecting the earned rights and benefits of America’s active and retired federal workers. The largest federal employee/retiree organization, NARFE represents the retirement interests of nearly 5 million current and future federal annuitants, spouses, and survivors.

Note: APWU of Wisconsin members (especially those under FERS) may want to write letters to Senator Herb Kohl and thank him for his support.
No comments:

Labor history could soon be part of Wisconsin school curriculum

MADISON (WPR) Wisconsin schools would be encouraged to teach the history of organized labor and the collective bargaining process under a bill headed to the Governor's desk. [Full Story]

The Postal Service issued the attached MMO, MMO-109-09, titled “Influenza Cleaning Contingency” for facilities to impose ADDITIONAL cleaning methods to reduce the spread of infection during the current 2009 to 2010 Influenza (Flu) season which includes H1N1 influenza. The contingency reflects the latest guidance issued from the Centers for Disease Control and Prevention (CDC). The additional cleaning methods are not intended to decrease the cleaning frequencies currently used in your facility (the current cleaning frequency for your facility can be found in the current authorized and approved custodial staffing package).

The additional cleaning requirements must be performed until the flu season (Fall of 2009 to April 2010) has ended, unless otherwise notified.

If custodial resources are not available for these tasks in facilities in which the cleaning services are performed by career maintenance bargaining unit employees, including those facilities covered by relief from another office, the Senior Postal Official (SPO) may require non-custodial personnel to perform them. However, before non-custodial postal employees can perform these cleaning requirements, they must be trained on the proper use of the cleaning chemicals and provided with any necessary Personal Protective Equipment (PPE).

There is much that is still unknown on how the H1N1 influenza pandemic will develop. At this point the CDC does not expect the H1N1 's severity to increase this flu season and therefore the cleaning tasks and infection control strategies contained in this MMO should suffice. However, this can change. Should CDC's guidance change, additional information will be issued.