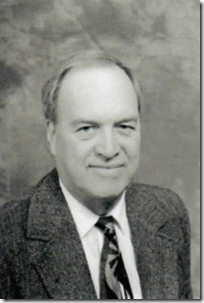 Hey Folks… here is the latest information regarding the 2011  John Akey Seminar.

Click here to view the updated registration information as well as the seminar listing of training classes.

Mark Ferrari and Sue Pederson are putting on a basic steward's training class in Milwaukee on July 12th. They would be more than happy to accept people from other locals if they would like to attend.

They need to know if anyone is interested in attending the Seminar by June 30th.

The training will be at the Milwaukee Union Hall at 417 N. 3rd St., in Milwaukee. The training will start at 9am and last 4-6 hours. A light lunch will be provided (probably ham and/or turkey, rolls, chips, soda.)

In testimony before a Senate Subcommittee on May 17, APWU President Cliff Guffey urged legislators to take immediate action to restore financial stability to the cash-strapped agency.

“This is not a request for a subsidy or bailout of the Postal Service,” Guffey said at the hearing before the Subcommittee on Federal Financial Management, Government Information, Federal Services, and International Security.

“The Postal Service is very capable of dealing with the challenges it is facing because of declining mail volumes and a shift to electronic transmissions,” the union president said. “What it cannot sustain is the burden of the unique and unreasonable requirement that it pre-fund its retiree health benefits over a 10-year period.” No other government agency or private company bears this burden.

The hearing was called to examine management plans and legislative proposals to address the USPS financial crisis, including an updated version of a bill introduced last year by Sen. Tom Carper (D-DE), chairman of the subcommittee.

Guffey praised provisions of Sen. Carper’s “POST Act” that would permit the USPS to use overpayments to its pension accounts to meet the pre-funding obligations, noting they would “give the Postal Service more than $5 billion in breathing room each year.”

But he also criticized several negative aspects of the bill. The proposed legislation would give the Postal Service authority to close post offices solely for financial reasons, and would require arbitrators to consider the financial health of the USPS when contract negotiations end in arbitration, he pointed out.

Guffey objected to proposals to allow management greater freedom to close small post offices, saying consideration must be given to the availability of postal services in these communities.

“We are sensitive to the cost and the possibility of deficits in small postal offices,” the union president added. “In our new National Agreement, we have agreed to flexible schedules and to the use of lower-wage and temporary workers in small facilities where such savings might increase the viability of small postal facilities.” Cutting service is not the answer to USPS financial difficulties, Guffey said.

Postal Workers Get the Blame

The union president also expressed the APWU’s “unalterable opposition” to proposals that would change the standards for arbitration when contract negotiations end in an impasse.

“The draft legislation we have seen would destroy the fairness of postal bargaining in several ways: It would put an arbitrary time limit on interest arbitration; it would make postal employees pay the price for congressionally-caused deficits employees have been powerless to prevent or alleviate, and it would place a cap on increases in postal wages.

“These provisions would gut free collective bargaining by postal employees, and the APWU is adamantly opposed to them,” Guffey said.

The APWU appreciates Sen. Carper’s leadership is addressing the pre-funding requirement and the overfunding of postal pension funds, Guffey said. “We will help in any way we can to support sensible legislation that does not seek to address postal financial problems at the expense of postal employees.”

APWU members are encouraged to contact their local legislators and urge them to support bills to correct the USPS financial crisis. “We must make legislative action a priority,” Guffey said.

APWU members approved a new contract May 11, with more than 75 percent of those casting ballots voting in favor of ratification. The final tally was 69,451 to 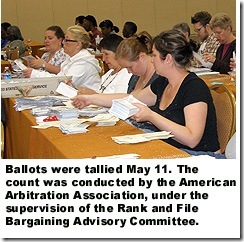 22,351 in balloting that ended May 10. The agreement will expire May 20, 2015.
“The new contract is an important achievement for the APWU,” said President Cliff Guffey. “We were able to retain protection against layoffs, bring back thousands of jobs in each craft, and limit excessing.
“The agreement includes many big changes, and I realize that some union activists are apprehensive,” Guffey added.“With help from the national union, I am confident that locals can implement the new provisions and protect the rights of APWU members.
“We also must make legislative activity a priority,” Guffey said. “We must support bills — such as H.R. 1351 — that will enable the Postal Service to remain viable in the future. This measure, which would correct postal funding inequities, is essential to our future.
“APWU members must visit members of Congress frequently and talk to them about our issues,” he said.
“In addition, we must focus on organizing,” the union president noted. “We have an opportunity to reach out to newly-hired workers and to non-members who are already on the rolls,” he said. “They will benefit from many of the new provisions, and we must let them know that their participation will make the union stronger.
“As a result of the new contract, the USPS will begin hiring — for the first time in many years. New people will strengthen the union and improve work life for current employees,” Guffey said.
New Provisions
In addition to safeguarding jobs and restricting excessing, the contract [PDF - members only] awards wage increases of 3.5 percent, as well as seven uncapped Cost-of-Living Adjustments. The first increase will take place in November 2012.
The agreement also includes several new concepts: The “full-time” designation will apply to any position of 30 or more hours per week and to any position of 48 hours or less per week. This will allow for the creation of a variety of full-time schedules, including four 10-hour days, three 12-hour days, and four 11-hour days.
However, no current employee can be forced into a full-time position of less than 40 hours per week or more than 44 hours per week. Furthermore, there will be no mandatory overtime for employees in non-traditional assignments or in functional areas that utilize non-traditional full-time assignments.
The new agreement also provides for the creation of new positions for non-career Postal Support Employees.
These employees will have the opportunity to join the ranks of the permanent, career workforce by seniority. They will be part of the APWU bargaining unit, and will receive raises, health benefits, and leave.
Transitional Employees and Casuals will be eligible for conversion to Postal Support Employees if they have passed the appropriate tests and are on the register. “We will begin to spread the word among TEs and Casuals right away and encourage them to take the necessary exams,” Guffey said.
The Numbers
Ballots were mailed to 176,611 union members, and more than 50 percent were returned by the deadline.
“I wish more union members voted,” Guffey said, “but I am pleased that participation increased substantially over previous ratification votes.” Forty percent of eligible union members took part in the ratification process for the 2006-2010 contract.
“The increase demonstrates that our membership is interested and active,” he said.
Ballots were mailed to 35,668 non-members, who were invited to vote, provided they completed union sign-up cards that were enclosed in their ratification packets.
The vote count was conducted by the American Arbitration Association on May 11 near Washington, DC, under the supervision of the Rank and File Bargaining Advisory Committee. Clarice Torrence, chairperson of the committee, announced the final results at 3:30 p.m. Eastern Daylight Time.
Results showing the voting by individual locals will be posted at www.apwu.org as soon as they become available. Winners of the union’s voter-participation contest will be announced as soon as they have been identified.
Bargaining between the APWU and the USPS began Sept. 1, 2010, approximately 90 days prior to the expiration of the old contract on Nov. 20. The parties agreed to several extensions while negotiations continued.
On March 14, the union and management announced a tentative agreement. The Rank and File Bargaining Advisory Committee voted unanimously to endorse the agreement, as did the National Executive Board.
Thanks
“I want to thank the members of the union’s Negotiating Team for their invaluable assistance,” Guffey said. “They are Greg Bell, Executive Vice President; Mike Morris, Director of Industrial Relations; Rob Strunk, Director of the Clerk Craft; Steve Raymer, Director of the Maintenance Craft, and Bob Pritchard, Director of the Motor Vehicle Craft. In addition, APWU staff worked long hours and provided expertise that was crucial to our success.
“I also appreciate the seriousness and dedication of the members of the union’s Rank and File Bargaining Advisory Committee,” Guffey said. “They worked diligently to represent the membership of our union.
“Finally, thank you to all the union members who made the effort to read the agreement and vote. No matter how you voted, the APWU is stronger and better because of your participation.”
No comments:

The 2011 John Akey Seminar has been scheduled and as in the past, it looks to be a good one.

The Minnesota Postal Workers Union will host the seminar this year and it will be held August 13 - 14 at the Crowne Plaza in St Paul, MN.  Registration fee is $90 per person if paid by July 15th, $110 if paid later.