Back in December of 2014 a settlement was reached between the APWU and the USPS regarding Postmasters doing bargaining unit work in small offices. The settlement had two parts.

The APWU at a national level gets the 1260 reports and disseminates them to the state and local organization so that they can contact the designated management person to begin the process of payment to the appropriate clerks. To date over $200,000 of payments have been scheduled in Wisconsin alone. If you work in a Level 18 office and think your Postmaster is doing more than 15 hours of bargaining unit work per week you should be getting a payout from the settlement. If you have not gotten a settlement payout you should contact the appropriate APWU representative.

The second part of the aforementioned settlement deals with the time before December 5, 2014. An award of 56 million dollars was achieved for that time period. The award time period goes from May 7, 2011 through December 5, 2014. If you were a PTF or NTFT employee at a small office (Level 18 and below) you should be in line for a payout. The payout works like this. The time period mentioned consists of 187 weeks. Each week that a NTFT or PTF employee worked will entitle that employee to one share which is worth $26.23. If an employee worked the entire time period it would amount to approximately $4900.

To those APWU members in these offices, thank you for being a member. You have contributed union dues which has helped the union financially and enabled the APWU to continue these long dragged out and expensive struggles. If you are a non-member reading this an 1187 form will be sent to you asking you to help contribute to these struggles. If you know a non-member encourage them to join. The APWU will continue to fight for the small office employee, but it is not cheap.

Wisconsin AFL-CIO President Phil Neuenfeldt said today: “The Wisconsin AFL-CIO applauds President Obama for proposing new overtime rules that will help 80,000 Wisconsinites and their families by closing the white collar loophole. Front-line managers of gas stations, convenience stores, and others who work long hours without additional pay will now be paid fairly. This is a step in the right direction to protect the middle class.”

“President Obama’s new overtime rules are a win for workers,” said Stephanie Bloomingdale, Wisconsin AFL-CIO Secretary-Treasurer. “Too many ‘salaried’ workers have been taken advantage of by greedy employers who have twisted the intent of overtime protections. The new rules will extend overtime pay to workers making up to $50,440 a year. Together, we will keep fighting to make sure that every Wisconsinite is paid fairly for the work that they do.”

A Wisconsin APWU delegation met today with Senator Tammy Baldwin in her office in Washington D.C. to discuss the future of the Postal Service. 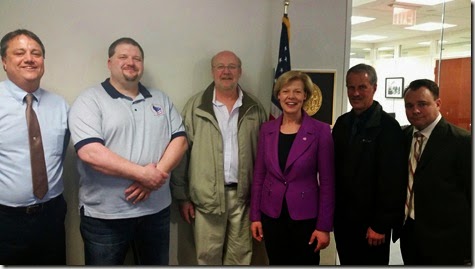 APWU of Wisconsin Spring Seminar is Right Around the Corner

The APWU of Wisconsin Spring Seminar is one week away.

See you at the:

Whether or not to approve construction of the Keystone tar sands pipeline is one of the first pieces of legislation that the Senate has taken up since the 114th Congress came into session this month.  For this bill, newly minted Senate Majority Leader Mitch McConnell has promised an open-amendment process.  Said McConnell, “nobody is blocking any amendments,” and Senate Democrats are taking him up on his offer. A wide range of amendments on a variety of topics have been offered, including amendments to subsidize heating bills for low-income families and require companies using the pipeline to pay into an oil spill cleanup fund.  This week, the Senate voted 98-1 in favor of an amendment to affirm that climate change is indeed real and "not a hoax."

While APWU opposes passage of the underlying bill, and President Obama has vowed to veto the bill, we are calling upon APWU activists to reach out to their senators and ask them to support this important amendment.  This bill’s open-amendment process could be a unique opportunity to force senators to say where they stand on the future of America’s public postal service.

Please call your senators and ask them to support the Sanders postal amendment.  To find the phone numbers for your two senators’ DC offices, please click here.