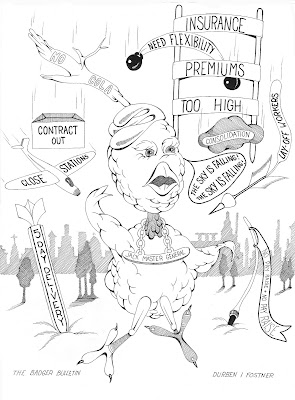 APWU Web News Article 040-2010, May 7, 2010
To honor more than 200,000 postal workers who participated in the Great Postal Strike of 1970, the APWU invites union members to purchase lapel pins that commemorate the 40th anniversary of the illegal work stoppage. Proceeds from sales of the pins will benefit the union’s Committee On Political Action (COPA).
Members can order the pins online at http://www.apwustore.org/ for $15 apiece. They also will be available at the 20th Biennial National Convention, which will take place on Aug. 23-27 in Detroit. The circular pins are gold and embellished with shiny stones.
In March 1970, postal workers across the country began an eight-day unauthorized strike, risking their jobs, their pensions, and their freedom. Their actions halted mail service and sparked significant changes in the lives of postal workers, politics, and the nation’s postal service. Less than a year later, five unions merged to form the APWU.
Because sales of the pin will benefit COPA, payment cannot be made from the funds of local or state organizations. Only personal checks, personal credit cards, or money orders will be accepted.
No comments:

APWU Web News Article 039-2010, May 5, 2010
Five days after the Occupational Safety and Health Administration (OSHA) issued citations and fines of more than a half-million dollars to the Postal Service for safety hazards in Providence, RI, the agency charged the USPS in Denver with similar violations. The Postal Service willfully exposed workers to serious and potentially fatal hazards, including shock and electrocution, at the Denver BMC, OSHA said. The agency issued additional fines of $217,000.

The safety violations [PDF] in Denver mirror the hazards found at the Providence facility, and support APWU claims regarding the Postal Service’s failure to adhere to OSHA electrical safety standards.

In four “willful” violations, inspectors found postal employees working on equipment they were not familiar with and properly trained to maintain; on machinery with exposed, live parts that were not de-energized; in areas with potential electrical hazards; and without protective equipment for the eyes and face, exposing them to injury from electric arcs, flashes, or flying objects. These violations accounted for $210,000 in fines.

The remaining $7,000 fine was associated with a serious safety violation in which safety signs, symbols, or accident prevention tags were not used to warn employees about potential electrical hazards.

OSHA inspections of the facility were conducted between Nov. 2, 2009, and April 22, 2010, after the APWU Denver BMC Local filed a complaint. The local acted in response to a request from Industrial Relations Director Greg Bell, who urged local presidents to file complaints with OSHA regarding the Postal Service’s failure to comply with electrical safety regulations.

The APWU expects more safety violations to be issued by OSHA in the coming weeks. Check http://www.apwu.org/ for updated information.
No comments: