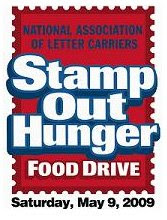 With U.S. unemployment at 8.5 percent in March, the highest rate in 25 years—and expected to get even worse when April's figures are released this week—the Letter Carriers (NALC) annual national food drive on Saturday comes at one of the most critical times in its 17-year history.
You can help "Stamp out Hunger" by collecting canned goods and dry food, such as tuna, canned meat, soups, pasta, rice and cereal, and leaving them in a bag or box by your mailbox.

Your letter carrier will pick up your contribution as they deliver your mail this Saturday, May 9.
NALC members will deliver the goods to local food banks, pantries and shelters to help needy families in 10,000 cities and towns in all 50 states and U.S. jurisdictions.