OSHA at 40: Time for a Makeover

The notion that Democrats and Republicans could come together and enact legislation that would protect American workers from on-the-job injury or death seems almost unthinkable today, but almost exactly 40 years ago, that is precisely what happened.

On December 29, 1970, President Richard Nixon signed into law the Occupational Safety and Health (OSH) Act, a compromise that sought to “assure every working man and woman in the Nation safe and healthful working conditions and to preserve our human resources,” according to its text.

The OSH Act has saved many thousands of lives. If workers had the same risk of death on the job as they did in 1933, government figures estimated that 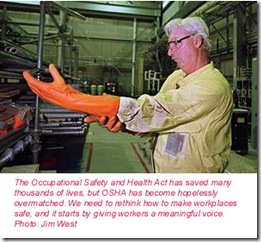 But today, the regulatory system that is the legacy of that landmark legislation is broken. The OSH Act has not been significantly updated since it became law and OSHA is hopelessly overmatched, struggling to oversee a 21st century workplace with 20th century tools. Nearly 5,000 American workers pay the price every year—with their lives.

OSHA is woefully understaffed, given the magnitude of its task. A mere 2,000 inspectors endeavor to cover more than 7 million worksites. The sanctions they can use against employers who routinely flout the law are too weak to function as deterrents.

When violations are discovered—all too often after the tragic fact—the penalties are laughable. The average penalty for a violation resulting in a worker’s death is only about $4,000.

Criminal penalties are nearly impossible to impose, even in cases of reckless disregard for workers’ lives. As a result, far too many employers make the calculation that it is simply cheaper to pay the fine, if they are one of the few who are caught, than it is to invest in a safe workplace.

Other federal agencies overseeing health, safety, and environmental regulations—from EPA to the FDA—all have been updated in the years since they were created to reflect changing circumstances. OSHA simply has not kept pace.

The fact is, OSHA will never have sufficient resources to protect all American workers. OSHA investigators cannot be everywhere at once.

We need to rethink how to make workplaces safe. The answer lies not in developing new OSHA standards on a one-by-one basis. This process has produced important worker protections in the last 40 years, but business and industry interests have learned that they can block new regulations indefinitely by constant legal challenges and political pressure. As a result, new OSHA standards to protect workers have become exceedingly rare.

A whole new approach has been proposed by OSHA Director David Michaels. His new Injury and Illness Prevention Program Standard, if enacted, would require employers to assess their workplaces, determine what hazards are present, and come up with solutions.

The standard doesn’t tell employers exactly how they should prevent hazards, but instead provides flexibility in determining the best way to protect employees.

But to stand any chance of success, these efforts must include meaningful worker participation. Workers know the hazards in their workplaces better than anyone. They must be allowed to participate actively in identifying workplace hazards and they must have the right to stop work, without fear of retaliation, if a hazardous situation develops.

Giving workers that measure of control over workplace safety in an environment of 7.2 percent private-sector union density would be no small feat. Health and safety advocates agree that safety committees should be mandatory in union workplaces. But in non-union shops, would a boss-dominated safety committee be desirable?

Workers, with or without a union, need new rights to protect themselves. Armed with that confidence, the workers on the Deepwater Horizon rig and at the Upper Big Branch Mine might have been able to prevent last year’s disasters at their workplaces.

Without it, we’ll be stuck in the same piecemeal system that fails to address the total picture of safety on the job—and wait for the next workplace disaster to strike.

Tom O’Connor is executive director of the National Council for Occupational Safety and Health, a coalition of unions, health and technical professionals, and others interested in promoting worker health and safety.