Our day to remember the fallen: Workers' Memorial Day 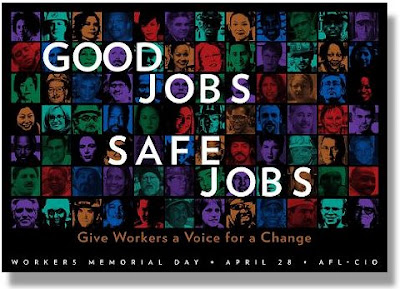 Every April 28, the international labor movement stops to commemorate the lives and sacrifices of workers who never made it home, and to renew the struggle for safer and healthier workplaces. Here is a sampling of the events taking place next Tuesday around the world:
Canada(British Columbia): 10am, BC Federation of Labour hosts a rally in honor of BC's fallen workers at Hastings Park, Vancouver BC.
Unions in India will hold meetings all day April 28 with government ministry officials to push for a ban on asbestos.
The Irish Congress of Trade Unions will host a one-day conference on improving reporting of workplace fatalities and enforcement of Ireland's workplace safety laws.
The South African Department of Labour in partnership with the ILO will hold an event May 8 titled "Health and Life at Work: A Fundamental Human Right."
Here in the U.S., Secretary of Labor Hilda Solis will participate directly in Workers' Memorial Day, as she helps to break ground for a new national workers' memorial at the National Labor College in Silver Spring, MD.
Solis' involvement marks a sharp turnaround from the Bush era, and underscores her commitment to improving worker health and safety. James Parks of the AFL-CIO blog has more about the day