(Saturday, February 26) Despite a temperature of around 12 degrees and a steady snowfall, a crowd estimated at over 70,000 gathered around and inside the capital building in Madison, Wisconsin to protest Governor Walker’s plan to strip public workers of their right to collective bargaining. This was day twelve of demonstrations against the governor’s 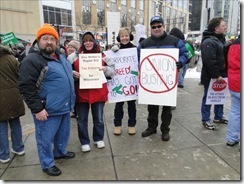 proposal, approved by the Republican-dominated State Assembly in a vote that was permitted to only last a few seconds at 1:00 a.m. on Friday, February 25. This measure remains stalled in the Republican controlled Senate due to that body’s inability to achieve a quorum, as the Senate’s 14 Democrats continue their support of public workers in Wisconsin by their holdout from an undisclosed location in Illinois.

Another reason for the Democrats’ actions are too slow down movement of the bill to allow Wisconsin residents to learn more about its contents. For example it has now become known that a provision in the bill empowers the governor to "sell any state-owned heating, cooling, and power plant or may contract with a private entity for the operation of any such plant, with or without solicitation of bids." This has lead to speculation these provisions were included for financial benefit of the multi-billionaire Koch Brothers, owners Koch Industries significant donors to the Walker for Governor campaign.

Claims by the governor that his proposal was necessary due to budget problems were shattered when public worker unions agreed to meet the governor’s demand for an increase in pension and health benefit contributions in exchange for dropping the union busting portion of the bill. The governor has continued his refusal to compromise. Besides ending collective bargaining, other provisions in this measure would end union dues deductions from payroll and require public sector unions to be re-certified by their members each year. When the governor took office in January, Wisconsin had a surplus that he quickly turned into a deficit by enacting tax breaks for companies at a cost of $117 million.

Attendance at the daily protests in Wisconsin’s capital has continued to increase since they began on February 12. In my 34 years as a member and officer in the APWU, I have never witnessed such a harmonious and diverse gathering of not only union people but really a cross section of everyday Americans coming together for a common cause – to stop the assault on the middle class. Amid chants of “Tell me what democracy looks like! This is what democracy looks like!; I say recall…you say Walker! and many others, as well as labor songs filling the cold Wisconsin air, there were: teachers, librarians, firefighters, police officers, bricklayers, prison guards, municipal workers, university professors, postal workers, electricians, laborers, painters, communication workers, teamsters, theatrical workers, democrats, republicans, former republicans, nonunion workers, small business owners, religious groups, retiree organizations, students, and many others all marching together in solidarity.

Although some mainstream media outlets reported that the daily gathering in Madison is comprised of a bunch of “union thugs,” myself and my wife Cathy along with APWU of Wisconsin Editor John Durben and his wife Mona were unable to find any thugs during the four hours we participated in the demonstration. On the contrary, everyone, and I mean everyone we encountered was friendly and courteous. Overall, the atmosphere was rather festive. It was also remarkable at the number of children and infants in attendance.

One could also not help notice the large number of offices and restaurants around the capital that are displaying messages of support for public workers and unions in their windows. Late last week a Madison radio station reported that since the demonstrations began, individuals from all 50 states and 52 foreign countries (in a show of support) have phoned pizza establishments near the capital ordering pizzas for the demonstrators.

While it is uncertain how the standoff in Wisconsin will end, one residual result is that the pushback from this incident could trigger the rebirth of the Labor Movement in America. Aside from the continuing demonstration in Madison, protests also took place in all 50 states this past weekend with more planned. Please visit the APWU website (www.apwu.org) for a listing of upcoming demonstrations and for a message from APWU President Guffey about the importance of APWU members lending their support by participating in these gatherings.

I invite you to visit the PPA website ( www.apwupostalpress.org) for a slide show of Saturday’s gathering in Madison. An extensive collection of photos are also posted in the “Photo Gallery” that can be found in the upper left column on the site’s main page. Also on the main page is a video of the Madison protest produced by onewisconsinnow.org.