"For the last week, working people in Wisconsin have staged a rebellion against a brutal attack on the rights of workers by a governor and legislature dominated by sociopathic Republicans. These plutocrats want to destroy collective bargaining for all public employees and turn Wisconsin into a right to work state for private employees.

Gary Huck and I both grew up in Wisconsin. Gary was raised in Racine and I grew up in Manitowoc. Both towns are on the shores of Lake Michigan and both towns were manufacturing centers. Racine and Manitowoc were devastated by the Reagan recession of the 1980s and are still part of the Rust Belt.

I've lived in Madison since 1971 when I came here to finish college. Wisconsin was the birthplace of Fightin’ Bob LaFollette, the founder of the Wisconsin progressive movement. Progressivism merged into the New Deal and Wisconsin was influential in the creation of laws and culture that respected working people. This is from the Wisconsin Historical Society : “Wisconsin's workers and reformers made significant contributions to the history of labor in the United States, helping to enact legislation such as workers' compensation and unemployment insurance that served as models for similar laws in other states. The study of labor history itself also began in Wisconsin when University of Wisconsin economist John R. Commons set out to document the history of work and labor in America at the turn of the twentieth century. Commons and his associates also joined labor leaders, the business community, and politicians to bring about some of Wisconsin's groundbreaking social policies.”

Wisconsin was also the birthplace of the American Federation of State, County and Municipal Employees, formed in 1932. They created what would later become Wisconsin State Employees Union/Council 24. We are proud to say that Council 24 is one of our subscribers. The progressive pro-labor culture dominated the state until the dismal 1950s when Joe McCarthy was elected and launched the McCarthy era of brutal repression of working people.

We are now experiencing another period of repression. The workers of Wisconsin know their history and know what is at stake. Again, robber barons are trying to destroy our traditions and the history that our forbearers fought and died for. We are determined to preserve our proud history and fight against the forces of decay.

In the election of 2008 we thought that change was coming. But change never comes from the top down. It comes from the bottom up. Allow me to use a football metaphor. The Green Bay Packers won this year’s Super Bowl. The Packers, the smallest market city in the NFL, are named after a meat packing plant in Green Bay. They are not owned by a plutocrat, they are a non-profit owned by the community. To Wisconsin, Packer football is as much a part of our tradition as the labor movement.

In the Super Bowl the team, devastated by injuries all season, lost two of their top players to injury in the first half. The game went back and forth, and in the fourth quarter the Packers found themselves in trouble. Kevin Greene, outside linebackers coach, pulled linebacker Clay Matthews aside and told him that the time had come to take control of the game. “It is time!” He said. Matthews helped cause a fumble that lead to victory.

For those of us who believe in dignity of workers, and believe in fighting for the least among us, IT IS TIME. Wisconsin workers are up to the challenge." 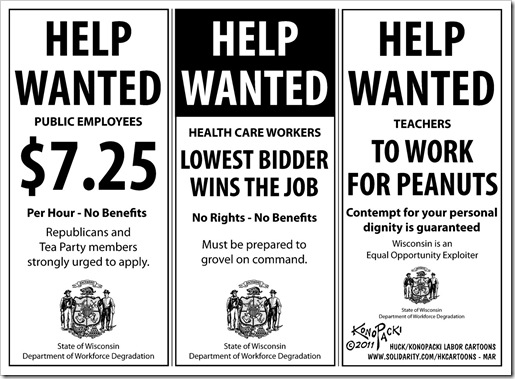